“I am victory and adventure.” 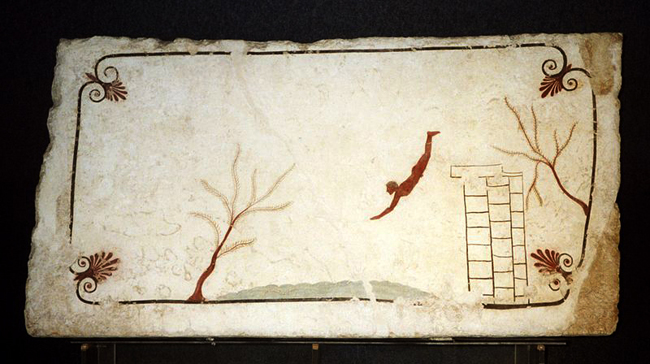 “The Tomb of the Diver” dates from the fifth century BCE. This image on an ancient Greek coffin portrays someone who has taken a daring leap and is now suspended in time. The diver is neither on familiar ground nor yet submerged in the water below. He is in a state of perpetual risk. His old life is gone: the new one has yet to begin. Taking to the yoga path is like that. The old world is gone, the new one, based on devotional service, lies ahead. To maintain vyavasayatmika-buddhi, steady intelligence, while suspended in this life between worlds, the Bhakti texts recommend chanting Hare Krishna, Hare Krishna, Krishna Krishna, Hare Hare, Hare Rama, Hare Rama, Rama Rama, Hare Hare—and keeping company with others who have taken the plunge. Victory and adventure await.