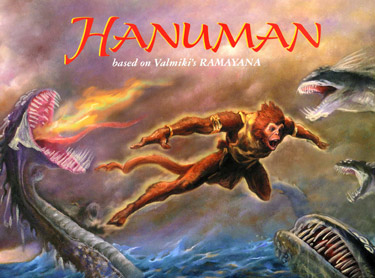 Grade 3-6 “Listen now while I tell you a tale of a time long past when the world was menaced by a ten-headed beast whom the gods could not control.” Such is the dramatic beginning of this excellent retelling of a portion of the ancient Indian epic, the Ramayana. This version takes the unusual perspective of Hanuman, military leader of the monkey clan. The tale opens when he is an impish young monkey, daring to fly to the sun. During his flight, he becomes distracted and falls, thus earning his name which means “broken chin,” and the elder monkeys pray he forgets his magical powers. Years later, when the evil 10-headed creature Ravana steals Rama’s beloved wife, Sita, the monkey is deeply moved by the young prince’s broken heart. His clan joins forces with Rama to confront Ravana. Now Hanuman must remember the incredible powers of his youth for they are crucial in the climactic battle. The narrative has a storytelling quality and an appropriately epic tone. Masterful oil paintings illustrate the text; they are charming when depicting the mischievous young Hanuman and powerful and striking when portraying scenes of danger and battle.”
— School Library Journal

The book is available for purchase online.