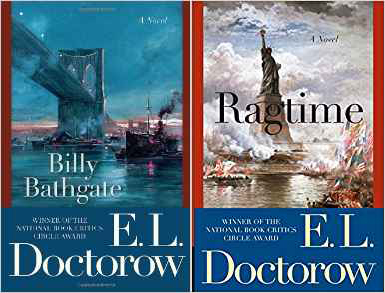 E.L. Doctorow passed away in 2015 at age 84 — one of the great contemporary fiction writers. Among his several books, I highly recommend these two. Billy Bathgate won the 1989 National Book Critics Circle award for fiction and was the runner up for the 1990 Pulitzer Prize. The story is told in the first person by Billy “Bathgate” Behan, a fifteen-year-old boy who first becomes the gofer and then surrogate son of mobster Dutch Schultz. A 1991 film based on the novel starred Dustin Hoffman as Schultz and Nicole Kidman as his “moll.” Ragtime, published in 1975, is a work of historical fiction mainly set in the New York City area from 1902 until 1912, with brief scenes towards the end describing the United States entry into World War I in 1917. A unique adaptation of the historical narrative genre with a subversive 1970s slant, the novel blends fictional and historical figures into a framework that revolves around events, characters and ideas important in American history.

These book are available for purchase online: Billy Bathgate and Ragtime.