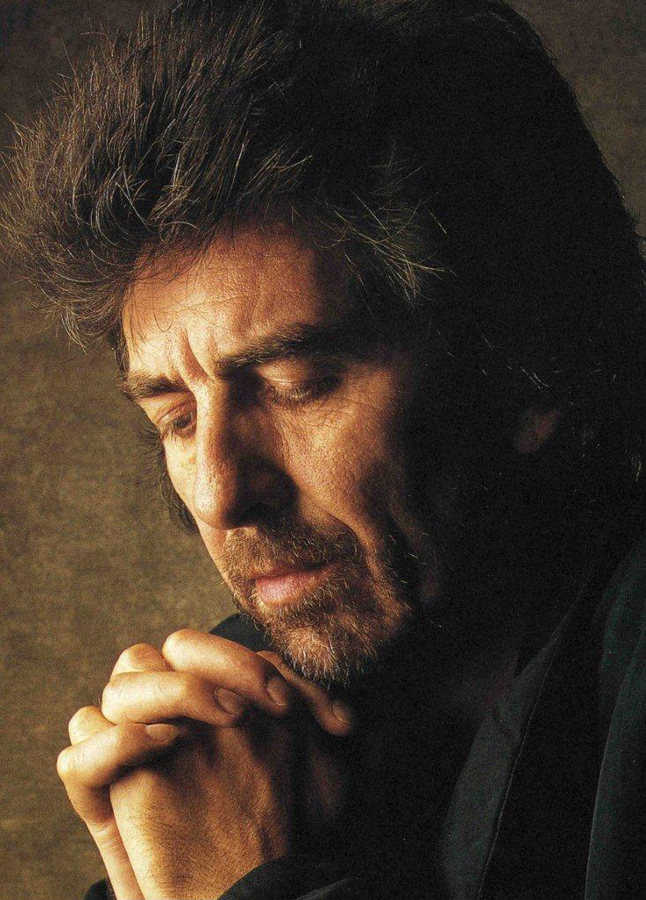 When the world around him seemed to be falling apart, yoga helped George Harrison overcome depression and dependency. If being a Beatle had taught him anything, it was to always go with the best, and going with yoga to overcome a dark time in his life was no exception.

George’s stress level had been building for years. From 1961 to 1966, as a member of the world’s most successful pop group, he made seven tours of the U.K., three of America, one of Europe, and two around the world. The Beatles played more than 1,400 club dates, often as many as three in a day, in addition to 53 radio shows, 35 television programs, and slogged their way through more recording sessions than any band in music history. By the time he 23 years old, George had already lived a lifetime of anxiety and tension.

George’s connection with yoga began when he heard a recording of ragas and sitar music in 1966. The sound struck him as familiar, “not intellectually,” he explained, “but emotionally” as though returning to some place he already knew. Ragas, which have the power to evoke deep spiritual emotion in listeners, led him to inquire about the philosophy behind Indian music—and that led to a trip to Kashmir later that year to study sitar and astanga-yoga. Each morning, from the deck of his wooden houseboat overlooking the Himalayas, he breathed in bracing mountain air and practiced sitar, his eyes shut, his fingers familiarizing themselves with notes along the instrument’s long wooden neck. Then he would do yoga asanas, sitting in a half-lotus position, breathing in slowing and breathing out the sacred sound AUM. When his exercises ended, he read books on self-realization by Swami Vivekananda and Paramahansa Yogananda, and in the peace and calm of an ancient land the young seeker discovered teachings that would permanently change the course of his life.

In 1970 the Beatles dissolved, and George launched a solo career with songs about his spiritual search that skyrocketed him to the top of the pop charts. His single “My Sweet Lord” featured the Edwin Hawkin Singers chanting the Hare Krishna mantra to organist Billy Preston’s gospel chords. It was an inspired combination—Hindu revivalism, the pop equivalent of interfaith prayer. By the end of January 1971, “My Sweet Lord” was selling more than 30,000 copies a day with total sales in America alone surpassing the two million mark.

That same year, in the U.K. his first solo album All Things Must Pass earned more than ten million pounds, and for a while it seemed George Harrison could do no wrong. In 1971, with his work solidly in the number one spot on charts around the world, he mounted the first charity rock concert in history, the Concert for Bangla Desh, which eventually raised several million dollars for victims of the war-torn nation. The concert also earned George the reputation of an activist willing to put his spiritual beliefs on the line for a good cause.

The debacle of his career came two years later. George’s third solo album Dark Horse garnered only mediocre reviews, and on the album’s promotional tour things went from bad to worse. George opened each show with Ravi Shankar and a troupe of Indian musicians playing a lengthy program of Indian music that had fans yawning and restless. When he came on to perform the second half, George’s constant exhortations to “Chant Krishna! Christ! Krishna! Christ! Allah! Buddha!” added to their unease. Where was Beatle George? People had come expecting at least a few Beatles memories but George refused to be pulled back into that material persona.

“Give the people a couple of old songs,” Ravi entreated him. “It’s okay.”

After a performance in California’s Long Beach Arena, George found himself wandering alone through the stands, remembering a quote from Mahatma Gandhi: We should create and preserve the image of our choice. The image of his choice was not Beatle George. His life belonged to God now, and playing the old hits would have felt hypocritical. How could he live with himself if he reinforced people’s illusory attachment to nostalgic tunes and images?

“Every show was probably hard for him,” said violinist L. Subramaniam. “My impression was that George wasn’t just looking to popularize Indian music but also a path of spirituality. But the press really wasn’t always sympathetic. Anyone else under that kind of pressure would have said, ‘Okay, I’m calling it off.’ But he took the risk of going on. Why did he do it? I always had the feeling someone very special was occupying that body.”

Why did he do it? Perhaps because George understood that somewhere along the way humanity had suffered a loss of spiritual vision, and no one else in entertainment had the courage to say so. If fortune had given him the resources for reaching wide publics, how could he avoid the responsibility that came with spiritual knowledge? George put his career and credibility on the line to send a message out into a spiritually impoverished world.

But now he was confronting the greatest disappointments of his life. His wife had left him, in large measure because of his preoccupation with spiritual pursuits. The Beatles had broken up. And now he was grappling with the devastating realization that most people simply didn’t care to hear about Krishna or yoga or getting liberated from birth and death. The world wanted rock’n’roll. The world preferred him as a Beatle.

Despite his public protestations to the contrary, some part of him cared deeply that the world was rejecting him and he went into a depression. His smoking and drinking increased and he developed a severe case of hepatitis from the “brandy and all the other naughty things that fly around” as he later described his habits at that time. Drugs had first entered his life at age seventeen when the Beatles played Hamburg and amphetamines were an easily acquired stimulant for all-night sessions. His drug use had gone up and down in the intervening years. Now it was back.

The ensuing despair forced him to recognize, “Jesus, I’ve got to do something here.” And that was when he remembered his yoga practices. “I had forgotten totally that that’s what it was all about—to release the stress out of your system,” he told journalist Al Aronowitz. He resumed daily yoga practice, daily chanting of the Krishna mantra on beads, and started paying closer attention to diet and exercise. He took Ayurvedic cures and concentrated on saving himself before trying to save the world. “In a sense,” he told a devotee friend in later years, “you have to become selfish in order to become selfless.”

He compared his need for daily meditation to a drinker’s need to attend an Alcoholics Anonymous program. Meditation was something that had become necessary “to keep myself focused and keep the buoyancy, the energy, and also to realize that all this stuff that’s going on is just bull. It’s hard to be able to not let that get next to you.”

Resuming yoga practice restored control and energy to George’s life. Daily practice freed him from harmful habits and inspired a repertoire of memorable post-Beatles songs. In yoga, as in music, the quiet Beatle achieved liberation from the material world.