How we see the past shapes our understanding of the present. Scholarship defines the past as something shaped by temporal human forces, primarily politics, power, and market trends. Wisdom traditions, on the other hand, see the past as shaped by universal, timeless truths. In this dialog, religious studies professor Ravi Gupta and host Joshua Greene explore competing narratives of the past, their impact on the present and their role in shaping humanity’s future.

Ravi M. Gupta (Radhika Ramana) holds the Charles Redd Chair of Religious Studies at Utah State University. He is the author or editor of four books, including an abridged translation of the Bhagavata Purana (with Kenneth Valpey), published in 2017 by Columbia University Press. Ravi has received four teaching awards, a National Endowment for the Humanities summer fellowship, three research fellowships, and a book award. He is a Permanent Research Fellow of the Oxford Centre for Hindu Studies and a past president of the Society for Hindu Christian Studies. His current research focuses on the Bhagavata Purana’s Sanskrit commentaries. He enjoys teaching World Religions, Hinduism, Sanskrit, and Religious Studies Theory and Method.

Iain McCaig and Joshua Greene have a forty-year history as collaborative storytellers.  Whether to entertain or enlighten, their relationship sprang from a mutual desire to create stories to remember and share them with the world,  Join them for an intimate conversation about creation and collaboration, of a forty-year journey to tell an ever-changing version of ’The Sorcerer’s Apprentice’ and the story of ‘Hanuman’, and their joy of using make-believe to search for the truth.

Iain McCaig has worked for over 40 years in the entertainment industry.  Many of his creations have become pop-culture icons, like his cover for Jethro Tull’s ‘Broadsword and the Beast’ and his Star Wars designs for Queen Amidala and Darth Maul.  He has collaborated on many films, among them ‘Harry Potter and the Goblet of Fire’, ‘The Jungle Book’, ’Guardians of the Galaxy’, ’The Avengers’, and the ongoing ‘Star Wars’ franchise of movies, graphic novels, and theme parks.

In his spare time, McCaig writes, produces and directs, and wanders the land encouraging people to draw and tell stories. In May 2008, Spectrum Fantastic Art gave McCaig the prestigious GRAND MASTER award for Lifetime Achievement.

A candid and practical discussion with renowned business consultant Elsie Maio about dramatic changes occurring in business and finance. This is a Gita Wisdom program for professionals and non-professionals alike, an open-ended dialog about how real people are dealing with real-world shifts in priorities.

Teaching guide for The Purpose of Capital, Babson College

The Story of Stuff

Elsie Maio is one of the world’s leading advisors to corporations seeking to bring soul-wisdom into their business. Known for uncanny insight into emerging trends, Elsie and her company’s SoulBranding℠ System have guided niche clients to lead in such diverse arenas as social-impact banking, gender-lens investing, environmentally sensitive household products, and public/private national infrastructure. She is a frequent guest on national media such as Marketplace and American Public Radio and cited in The Wall Street Journal, American Banker, and The Journal of Business Ethics. Most recently as a voice for “the New Narrative,” she has been a guest in the provocative webinar programs of Humanity Rising and Future Capital.

For 25 years, Cristina Casanova (Krishna Lila) was Assistant Director of Guidance for the New York City Department of Education with a focus on crisis management and family therapy. She teaches in the Department of Applied Psychology at New York University. For more than 40 years she has been a Bhakti yoga practitioner who integrates wisdom from the traditional yoga texts into her approach to therapy.

An inner-city shooting, a yoga class in Qatar, a WWF wrestling match, and battling the voices in our own heads. These are just a few of the topics Joshua and Jules cover in this podcast and there’s a story about how yoga connects them all. 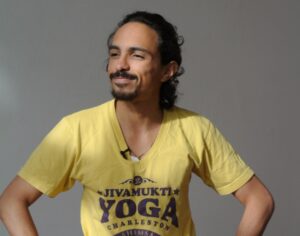 Jules is a renowned teacher of asana yoga, meditation, chanting, and yoga philosophy. Jules, who started practicing yoga at age 6, is now considered one of the leading teachers of the Jivamukti Yoga method, teaching the method worldwide as well as facilitating at the very highly regarded teacher training programs.

We start with a recap of Chapter Six up to the current verse of the Bhagavad Gita.

[BG 6.25]
Gradually, step by step, one should become situated in trance by means of intelligence sustained by full conviction, and thus the mind should be fixed on the Self alone and should think of nothing else.

Mentioned in this podcast

loka-sangraha – to work for the welfare of all beings
paramatma – “Supersoul,” God in the heart of each being as witness and well-wisher accompanying each soul through its many births
pratyahara – controlling the senses
rasa – essence, taste, flavor, mood
samadhi – As the final stage of Patanjali’s eightfold yoga, samadhi is usually considered a shedding of all ego and a complete union with God, a merging in ultimate reality, what might be qualified as nirguna-samadhi. Bhakti leads to saguna-samadhi, or union with God in love, in interest, which implies retaining one’s gunas or qualities. Only in bhakti is ananda part of samadhi. There is no ananda in nirguna-samadhi, only sat and chit features of self-realization.
sisya – student

Joshua: Welcome one and all. I wanted to just recap. This is the sixth chapter of the Gita, which is particularly dedicated to yoga practice.

[00:22:18] So what is it that yoga is trying to say to us? That we’re all cracked pots. You know, we’re all crackpots! But it’s that uniqueness of our flaws and imperfections, you might call them, that makes life interesting and rewarding. So, don’t hold yourself or anyone else up to some rigid standard of perfection, take people for who they are and look for the good in them. [00:22:49] So, I guess blessed are the flexible for they shall not be bent out of shape or something else. I always loved that story. I think that’s what we’re being reminded of– you don’t need to give into some artificial image of what the contented life or a full life is. It’s already there, just admire and appreciate the miracle of what’s already around us. It’s pretty cool. [00:23:17] Yadunath: From one crackpot to another, thank you very much. [00:23:18] Joshua: You got it. All right. Thank you all so much. It’s a pleasure spending time with you as always.